On Losing a Tree 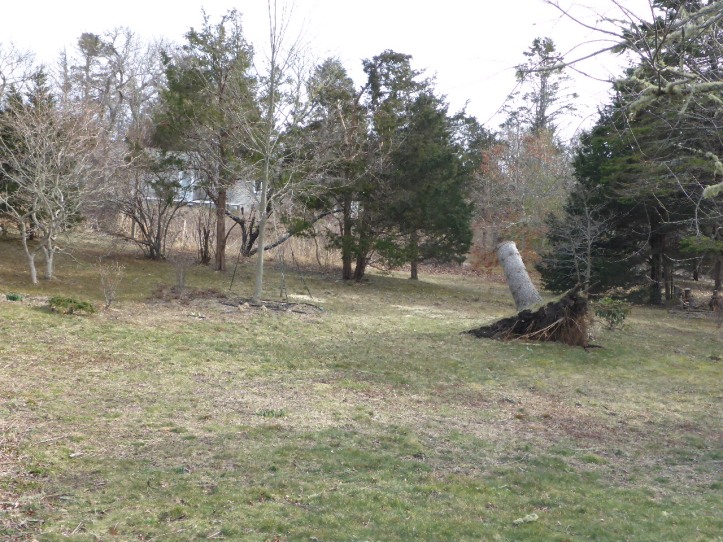 In a 2018 Nor’easter we lost a big Norway spruce that was a centerpiece of the back slope.  Then another in the woodland, then two more, and then more as high-wind storms have become more frequent.
It’s not like losing a family member or a pet, but there is still sadness when you lose a tree. Most of the losses were non-natives, an arborvitae and 4 Norway spruces nearing the end of their lifespans.  Any living thing that grows tall to maturity deserves respect, so I was sorry for the arborvitae and the spruces. But two of the losses were red cedars, a species I love, and which formed key parts of my landscape design. Surprisingly, it was the younger of the two red cedars that I regretted the most.
A bit of backstory – our land used to be farmland, possibly for a very long time, but farming was abandoned in the 1960’s. It’s now in the early stages of woodland succession, filling up with trees and shrubs like the red cedar, arrowwood viburnum, bayberry, sumacs, and young oaks.  I’m just a little bit thrilled and in awe at the way nature regenerates itself, so I value each and every one of those plants.
The young red cedar was about 15 years old, and I had watched it grow up from a seedling, taking care of the cedar rust galls when they appeared.  It was in exactly the right spot, and I had great plant to feature it as a specimen tree when was full-grown.  So I was sad when the toppling Norway spruce shown above snapped off that cedar 12” from the ground.  The other red cedar was further back but shaded an important part of the woodland garden.  There’s more light there now.
After feeling regret at the tree loss, my next thought was “Oh darn, this is going to change my design plans,”, which was followed immediately by “Oh fun, now I get to re-imagine those pieces of my design and come up with something new!” After a year of consideration, I’ve got the stumps removed, some designs done and planting underway.
Arborvitae Replacement

The arborvitae was in a crowded corner by the garage, a spot that needed frequent pruning to keep in control.  It was pretty easy to visualize a smaller plant that would be easier to manage, say a 6-8’ native shrub.

I considered a number of shrubs, such as Ninebark. Because this is Cape Cod after all, and because of the part shade conditions, I went with two oak-leafed hydrangeas. They should grow together over time to form a mass in front of the cedar shingles.  Next spring, I will fill in the front part of this area with perennials and lower ground covers.  That design will be a fun winter project.
Norway Spruce Replacement
The area where the large Norway spruce was is now about a 25’ x 25’ open space between a red maple/blueberry/fern grouping (on the left in the top photo) and the main pathway into the woodland area (in front of the red cedars on the right).  It’s a part-sun north-facing slope, the edge of the woodland.  I wanted to fill in with more interest and extend the woodland edge a bit further down the slope without getting too complicated and adding a lot more maintenance.  So I was focused on small trees and shrubs.
This kind of design challenge is a bit daunting for me.  I’m getting better at finding interesting plant combinations within a garden bed but figuring out a larger structural and architectural design is still pretty new.

The way I approached it was to create a sketch of the major shapes from the patio, the vantage point I most frequently use.  This always lets me look at a situation with a fresh eye; when I drew this the lovely seemingly circular sweep of the existing trees struck my eye.  It was kind of obvious I didn’t want to disrupt that sweep. 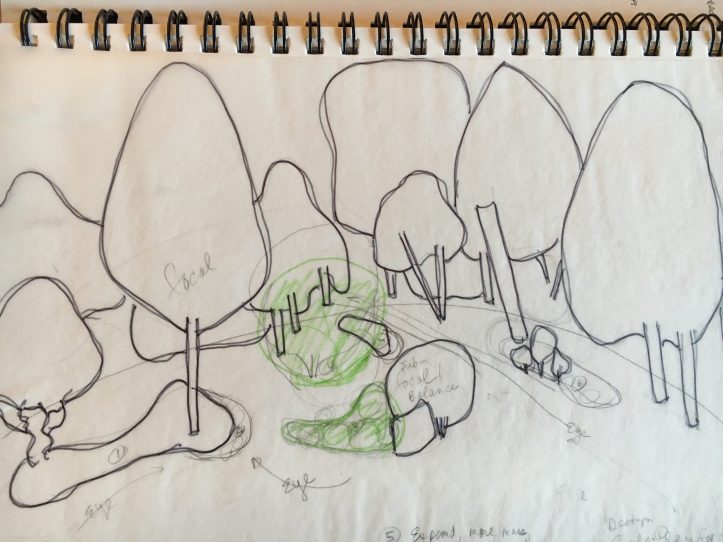 Then I added a layer of tracing paper and began sketching out various combinations of small trees and shrubs.  It became clear that another tree in that spot would be too much and would detract from the sweep and the other tree shapes. So the upper shape had to be large shrubs.  I also had to visually connect the large round shape (a rhododendron) with the new large shrubs and the maple tree on the left.  That would be a triangular mass of low shrubs pointing to the maple. 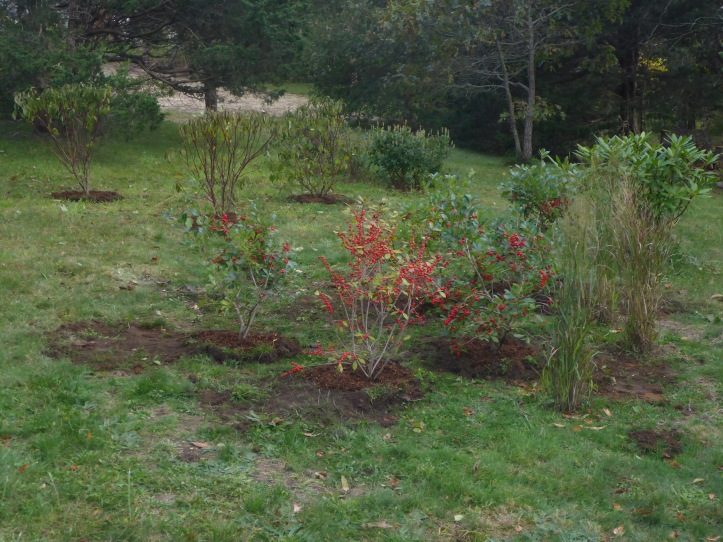 When I went plant shopping at the fall sales this year, I was in luck.  I found three silky dogwoods (Swida amomum) and five dwarf winterberries (Ilex verticillata ‘Red Sprite’). They should all double in size over the next three years and fill out the design I have in mind. 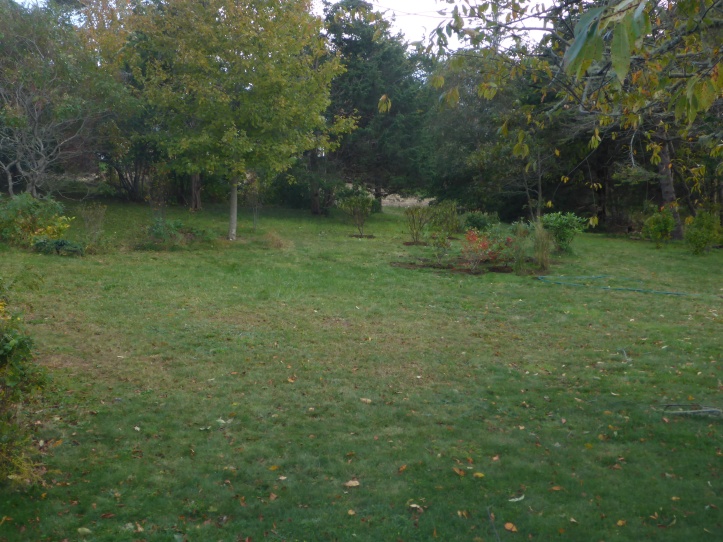 The more I garden, the more I appreciate that gardens are never static, and that externally imposed change is an opportunity to move my garden along.  I was able to salvage wood from the trunks and large branches of the fallen trees and re-use it in the landscape.  And now I’ll be able to replace older non-native trees with more appropriate natives.  A kind of positive ending for a sad event.