Design with Natives – Side Entry

This next exercise is in my own yard. Between the sliding glass door and the garage, facing northwest, is this 4’x4’ space filled with a clipped yew. The left side is shady, but the right gets a lot of sun:

I know, pretty sad for someone who calls herself a gardener.  Last year I decided to experiment and put in two different sedge cultivars, to see what whether either would survive here.  The one on the left, the shady side, did fine, and started to spread a bit (although it looks a bit ratty in this winter photo) but the one on the sunny side did not.  Good lesson learned – things can grow here, but a single species will not work because of the different growing conditions. Now I’m ready to think through a vignette design more carefully and plant next spring.

My design goal here is to create an interesting combination with some year-round interest, creating more of a statement than a single clipped shrub.  I want to introduce my planting style – relaxed, ecologically sound with layered plantings and using plants as a living mulch.

Because of the small size of the space, I can fit only a few more plants, with the front ones only 12-18” tall and the side plants under 6”.  The right side is sunny, the left is shady, and the soil throughout is sandy with average moisture, and I can water periodically and in droughts. There will be some competition with the yew to watch out for.

This design exercise is really about defining the desired shapes, textures, and colors, and finding the native plants that meet those criteria.  I started by assuming that I will trim the yew level on top and prune the right side so it is a more uniform shape.  While I find it tempting to jump right to selecting plants, I knew I needed to work on the overall shape first: 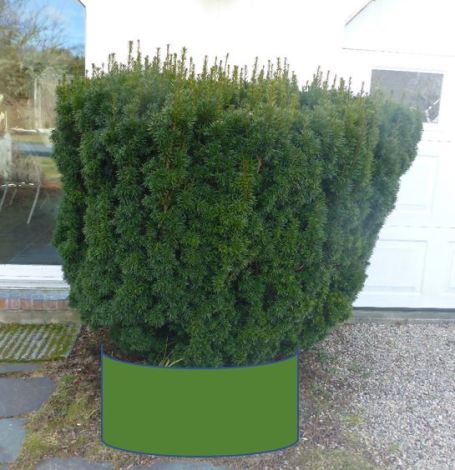 I copied the photo of the space into PowerPoint (Paint or any other graphic design software would work too), then used one of the Basic Shapes to start playing around to find a shape to complement the urn-shape of the yew.  Taller shapes than this obscured the urn-shape, which I decided I wanted to keep.  Wider shapes were OK, but I knew I needed lower plants on the sides.  And I couldn’t plant a single mass on the front, it had to be two different plants. Taking this one step further, I broke up the shape into multiple smaller shapes:

Again, I played around with different arrangements. I decided I preferred a slightly asymmetrical planting, with a larger plant on the right, reduce the formality. And I needed one of the low plants to continue around the front for continuity and to break up the two larger front plants.

Next came the really fun part of the design process – finding plants and testing them in the design.  Because the yew is a fine-needled plant, I wanted the front plants to be fine-needled or thin-bladed to create some unity in the design.  The side plants could be round-leaved plants for contrast.

For the left side, I am happy with the sedge, but needed a low-growing shade plant to fill in the left side of the square.  Candidates I found were barren strawberry (Geum fragaroides), foamflower (Tiarella cordifolia), and the native version of pachysandra, Allegheny spurge (Pachysandra procumbens).  All of these are clumping and slow-spreading, which is best for this space.  I decided on the Allegheny spurge, because the other side of the sliding door has a bed of the non-native pachysandra and I thought it would be effective to bracket the door with similar plants.

On the right side, I needed a sun-tolerant plant that would have thin leaves. In a non-native world, it would have been a Stella d’Oro daylily or some similar plant with thin leaves.  But I could not find a New England native plant that was similar, so I considered native grasses.  I have prairie dropseed (Sporobolus heterolepsis) elsewhere in the garden, so I went with that.  On the far right, I needed a low-growing creeping groundcover kind of plant.  Sedum would work, but since it’s not native I thought bluets (Houstonia caerulea) would be interesting and would add spring flowers.

To test these ideas, I discovered something about PowerPoint I hadn’t known – you can fill any defined shape from a picture, either your own or an online image.  To find an online picture for each plant, click on Shape Fill/Picture/Online Picture, then when the search bar appears, key in the plant name and a bunch of images appear.  Click on the one you want, hit Insert, and voila! 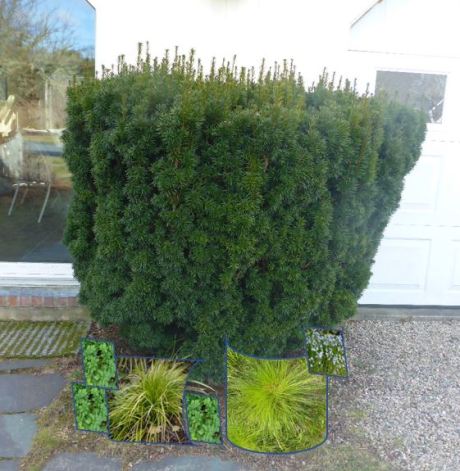 A much better way to visualize the space with the plantings installed.  But I wanted one more refinement.  I had another picture of the “Before” space but taken from an angle.  I wanted to check the composition from that angle, so I pasted the images into that photo to see what it would look like.  In this one, I played around again, using the Custom Shape tool rather than the Basic Shape, to get a more plant-like shape, and found out that Filling with an online picture works here, too.  Then eliminating the Shape Outline completed the refinement:

I’m kind of liking this!  It does the job of dressing up the yew with more interesting textures and different colors of green.  There is nice contrast of textures, making it look richer, a vignette that you actually might look at when you enter the house, vs. ignoring a plain old clipped yew.

Ecologically, this should work, too.  The Allegheny spurge, sedge, and bluets are all slow-spreading clumping plants, so they should play well together.  The sporobolus can be a vigorous spreader with its seeds, but in this situation with the driveway and stone walkway that should be contained and manageable.  To install, I will need to buy the Allegheny spurge, but I have bluets and sporobolus elsewhere in the garden I can transplant here.  This will be fun!